"I believe that the day will come when everyone will be able to smile together."

Impey Barbicane is a man who accompanied Arsène Lupin to London. He is energetic, care-free, and tends to get carried away fairly easily, but no one can deny his extraordinary ingenuity. He is searching for an important item that was taken from him long ago.[1]

He is one of the five characters the player can choose to pursue in the game as Cardia Beckford.

Impey is a tall and muscular young man who has a unique appearance with a steampunk theme. He has long red hair that is braided into a ponytail that reaches his waist, while the hair framing his face is shorter and pokes outwards and bright green eyes. He has two noticeable fangs in his mouth which are seen when he smiles or talks. Impey's attire includes goggles on his head, a necklace, a white striped tank top with zippers, an orange engineer suit with one arm free, gloves, a sort of pouch that hangs by his waist holding a wrench, and black knee-high boots.

Having a very excitable and slightly childish demeanor, Impey is mocked by others. Despite this, he appears to be very self-confident. He flirts without worry that he'll be rejected, he boasts without care that someone will insult him, and he smiles easily.

He claims that one day, he will be the first man to land on the moon...

A mysterious duo (later revealed to be Impey and Arsène Lupin) idle time away in the area around a mansion in Wales. They wait for days before a group of British soldiers, lead by Captain Leonhardt, finally arrive, signalling the direction of the duo's target.

As it turns out, the British Government is looking for a monster that can burn skin on the orders of Finis, leader of a secret government agency known as Twilight. When they find Cardia Beckford in the mansion, they are surprised that their monster is a woman and proceed to take her into custody.

Before she can be taken, though, Lupin and Impey intervene. Using Impey's inventions, they stop the automobiles in their tracks. From there, Lupin reveals himself and is deliberately showy in order to distract the guards, slipping away with her under cover of smoke, despite Cardia's initial protest.

Lupin promises to rid Cardia of her poison, and Cardia agrees to go with him, causing the start of the adventure. The next morning, they meet up with Impey, though he is at first unaware that Cardia was their target the night before and is distracted by how beautiful she is.

Chapter 7: The Bouyant and the Bellicose Edit

Chapter 8: Nobody Understands the TruthEdit

Chapter 13: Fly Me to the MoonEdit 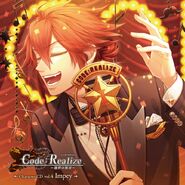 Retrieved from "https://code-realize.fandom.com/wiki/Impey_Barbicane?oldid=5979"
Community content is available under CC-BY-SA unless otherwise noted.