Count Saint-Germain is a wealthy landowner with a mansion in London and a gentleman at heart with an air of grace and dignity. He graciously opens the doors of his home to the protagonist and her party. He is somewhat of strange bird but he is happy to help everyone for the amusement it provides.[1]

He is one of the five characters the player can choose to pursue in the game.

He is also voiced by Daisuke Hirakawa in Japanese and Brandon Mcinnis in English.

Saint-Germain is always seen with his eyes closed, as if he were blind. When they are open, however, they appear to be a clear, icy blue color.

It is very rare he is shown with his eyes open. If he is, it often means he is giving his "zero temperature smile", or the situation is considered serious.

However in the sequel games this is not the case and his eyes are more often shown open. In his own route, his eyes are open for most of its duration.

He first appears in the second episode.

Like Van Helsing, Saint-Germain is quite mysterious and not much is really known about him. He seems to be a kind and warm-hearted man who wants to stay out of trouble

It's hard to read his emotions because he's always smiling. He's even-tempered, but when angered, he's incredibly intimidating. The fastest way to anger him is to threaten to steal or destroy his beloved art collection.

Chapter 7: The Buoyant and the Bellicose [edit | edit source] 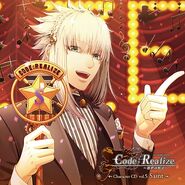 Retrieved from "https://code-realize.fandom.com/wiki/Saint-Germain?oldid=5981"
Community content is available under CC-BY-SA unless otherwise noted.